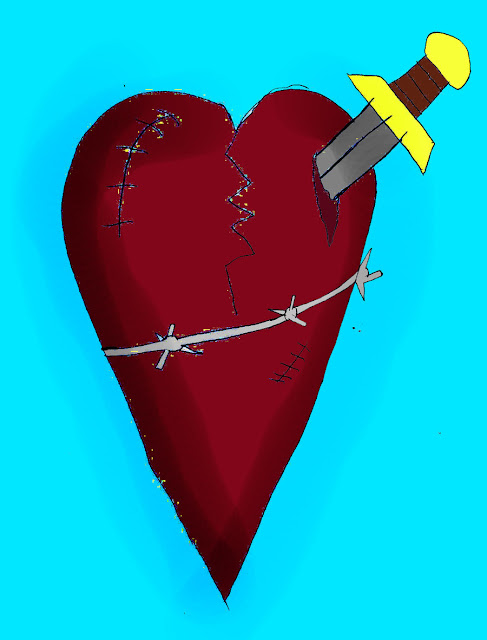 It wasn't the numbers, I swear it wasn't the counting. Every day was llike holding your breath in blood chill water. when would she leave? How could she leave? How can someone just change on you and wear so many faces, like a hitler of sorts. Andre stared at the figure opposite the small retro dining bar, he gulped nervously watching the tears swallow into his cup, bleeding his insides out, as his choice, the one he'd picked before everyone, dreams he'd dusted off and smiled at, were a marshmallow in a boiling pot of hot black coffee. " It's my birthday on sunday, and your leaving still," he scanned his mother, his bedroom eyes loaded with both hate and questions, his stomache a washing machine spinning endlessly, making him feel sick. His lungs desperate to cry out for the stolen oxygen, file a complaint for the laughter she had kept from him for almost 20 years, locked aaway like an Indian Sacrifice. Summer should have been buoyant with his chipped teeth, Romeo feeding him tales of this girl, that girl, and which way all the girls liked it. Yet summer felt too hot, and too sticky, because he was in the presence of a woman who couldn't love herself, and therefore could not love him. Alicia downed her third cup of Johnson's baby gin, it wreaked off her skin like parfume, clung to the wires on her head, and belly rolled as a happy jamaican in the culture of Carnival. There were no carnivals in Mia's web, the small bar was in an solated part of town , right next to the police station. It was where people loved you, and abandoned you. Where boyfriends cut the clingy chords of girls who loved too much and too hard before they were ready, where mothers with veins like his downed ice cream soda whilst popping three pills and preparing for a suicide.
" You always leave anyway," he shrugged
" i'll be back,"
"when i'm old and gods written my story," he countered. There was a long silence, the silence you get if you were def, or a screaming tape is paused, " why do you always forget me,"
"dont be dramatic,"
"why can't you love me, why cant you stick at things, why do you always run," there was a gap a tidal wave wide. Alicia played with her spoon, studied the chequedred floors, the painting of Otis redding once black and white, had been replaced with a colour poster. Mia circled their table, offering more drinks, Andre knew anything would be bitter in his mouth, so he shook his head stood up slowly, and dropped 3 pound coins onthe desk. It wasn't the numbers, the amount of men, he glared athis mothers soft brown eyes, they had a hint of a sickle, like someone used to inflicting pain. That lottery win had changed her, she would escape into oblivion once more, not needing him, not needing anyone but the souls that chattered, angry windchimes in her head." I love you," he said, "send me a postcard, and ill send you a picture of your grandchildren when i cant-"
"Dont be like that," she croaked. "I- I-" he took both her hands clasped them in his, "one day mother i hope you let someone love you, even me."  More importantly how.it's a painful thing to watch the one you love crumble and disappear like a melted snow flake in the air. "Elvis has left the building."
Email Post
Labels: creativity expression literature otatade iseghohi okojie poetry vision voice