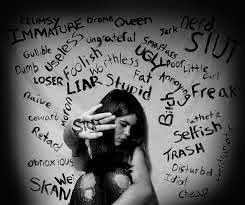 When your not supposed to be with someone your not supposed to be with them. You dont want them and no amount of bullying harassment or wearing you down systematically should divine that this one person is who you turn to. I once came across a guy who betrayed me in the worst way, after reaching out to him because i thought potentially he might make a good friend, i got the shock of my life. First i was ridiculed and humiliated by those around him so he'd feel better about himselves, but when is started moving past that. Getting my self confidence back,other guys began to find me attractive. He became extremely jealous as though i were a posession, as though i belonged to him. The more i struggled to build my self esteem the more he'd desperately tear it down, he was your archetypal psychopath. If i recieved phone calls from other men, he'd spread lies amongst neighbours and friends, ensure the people who i had once connected to were involved that i was loose or whorish. Despite it being extremely apparent to me that he had an interest in me beyond subtle niceties, this guy turned into my worst nightmare. Producing lies to alienate and Ostracize me from as many people as possible, it was done very cleverly by pretending as though it were a joke. I was just humor for him and his friends but there was something evil, sinister and psychotic about it. At one point out of sheer envy he came up with a plan to convince those that i was close to that i was mentally unstable. To friends i was described as 'the ugly one' he'd tell whatever affairs he'd listened too about me and my family to ensure we were looked down upon. Yet i'd see it in his bizarre reactions, when male friends came to visit, when id get a phone number from an attractive or confident guy, when i was alone he would happen to be near or tiptoe towards the same vicinity, pretending to get things from booths of cars, if i was moving about a certain time, he was suddenly moving about at that time, closing the front door quietly as he tiptoed back in. I hated him, because he had felt unsure of himself and inadequate his goal had been to destroy any ounce of confidence i had. When he sensed it coming back, the insults would begin again. He was psychotic.

Emotional abuse is psychological. Many of the things he did were sadistic and cruel, an abuser will use such strategies as comparing you to someone else to make you feel less adequate, insulting things that are precious to you, your skin tone the way you look, your features, whilst strategically trying desperately to control you. His problem wasn't that i had done, this that or the other, being someone with extremely low self esteem himself his problem was the fact that he couldn't control me. More so still because i had never ventured into a relationship with him. What would i say to women all over the world about men like this, the controllers, the Gaslighters, the emotionally abusive individuals who seem to believe human relationships is all about Millitant control. Run. People often argue points such as keep your distance if you value your self esteem, that's great, but what your looking at is a Suicide bomber and there are how many degrees of separation. We debate whether physical abuse is worse than psychological abuse, a wound will heal, but the mental scars heighten things you may already suffer from, paranoia, fear of trusting people and reaching out building , close relationships. They will counter their defense by belittling your emotions, calling you oversensitive, ensuring that those around you think it's in your head, yet if your so damaged and so lowly to them why the hell wont they leave you alone. It's simple on the surface they appear to be functional people, yet as time unfolds other people can see how damaged they really are. Relationships dont last unless it's a pretense, a man who may have a partner and a child, instead of being focused on planning that child's future, what school he or she goes to, what type of friends they'll have, where they'll be taken for the holidays and core things that deal with focusing on someone who is pivotal. It may not be a child, it may be a business and you have to be smart enough to be able to acknowledge why. I was called ugly systematically, nicknamed the embarassment, potential friends were warned of how supposedly loose i was. The abuse was insiduos and only took place whenever i was alone. Whenever other men appeared beside me and wanted to draw the situation to a close, he'd close the blinds, feeding more lies, at one point he had ensured those close to him spread a rumor that i had aids and was an ex prostitute, simply because i wouldn't sleep with him. He'd say things to friends such as "i wouldn't touch her with a barge pole," then beg consistently to others to convince me to have sex with him. " One night. Just one night." He'd try and make me feel inferior to family by saying such things as "No you just sleep with the dark skinned one, but the light skinned one you marry," Knowing how desperately i wanted things like marriage, a long term partner. He would assign those close to him to make jokes about how dark skinned i was, making it appear as though i was too black to be loved. Then one day it became too much and as i was at my lowest point, he'd encourage things like slit your wrist and cut your throat, hang yourself. Kill yourself. He's defence consistently remained "i was just messing about,i was joking." The worse thing about people like this is they appear to be consistently innocent. People close to me refused to believe it because they seem as though butter wouldn't melt. Butter doesn't just melt their soaked in it.

If you come across a systematically abusive person it's not just about you.Something in them is damaged and destroyed. A lot of the time, they want to be close to you whilst envying things about you.

Create distance
Find someone you can confide in be it a therapist, a counsellor, a friend
Out them at all cost, because what their doing isn't just sick, it's weak, their using you to make themselves feel emotionally strong. Do not allow yourself to be humiliated, if you were so flawed they would leave you alone.and focus on accumulating a better life, a happier life. You are not the embarassment they are. This individual refused to admit any interest in me because i was too dark skinned, not conventionally pretty, wasn't as popular as i had been as a child. Sing like a wolf. Howl like an Owl tell everyone, it will shame them into doing it less, because other people know about it. They can't defend it as easily, others would have witnessed it. The funny thing is for years despite the things i had accomplished even whilst dealing with a disability, ultimately i realised why he was doing this to me. I was seen as a strong person, and he wanted to humble me in the worst way possible.  I'd hear that supposedly " i fancied myself," when i'd speak up " he'd defend that i was paranoid, almost making me appear delusional." I began to feel unlovable. When people empathised with me, or he sensed it rather than admitting to his guilt, he would say things such as " i was playing up, performing, being an attention seeker." Whenever i tried to move away or create distance he became psychotic, " asking people strategically to slow me down. Dont let her get away, she runs away from everything." Yet i realised why he was doing this, in a show when i was watching the real housewives, one of the wives had said to the other, " i am your story,you need me just to talk about me just to get an interview, just to get a radio lookin, just to make a headline." That's how it felt with him, he needed me as a platform to have a topic of discussion with friends, family, anyone, he needed me to make him appear interesting. If i wasn't around him and those around him had absolutely nothing to share with others. To lure them in.

When you stand up to an emotionally abusive person, you will be told that your being a drama queen, manipulative, your always doing this, The problem isn't you it's the way they feel about themselves. Something about you makes them feel so emasculated they have to attempt to break your spirit.

Second thing women can be extremely dumb. One of my frustrations with the situation wasn't just what he was doing, but the fact that there were women who went along with it. Why didn't they speak up because whether they liked me or not a part of them knew it was wrong, that's why they kept it so hidden. That's why i was humiliated only when i was alone, then when other people were around me they'd make excuses for why they wouldn't create such a scene in front of others. It was much too much drama yet they'd expelled poison about those around me.

I also thought things such as all those young men who bought in just because they wanted to be part of a group, have a brotherhood, be part of something, what if that were there sister, or daughters they tuck into bed. Every woman has a side, every person has a past. Your past unless your a serial killer or an axe murderer your past should belong to you. It's not you, whether the abuser is a woman or a man, it's them. There are several degrees of pain separation, and sadly you may never know why your being punished for that one woman once upon a time that rejected him/her, for the childhood friend or sibling he/she could never measure up to. If someone is emotionally and mentally abusive don't pick the battle, pick the war. An exit is your best strategy. You will need your strength for all the tough things that life has coming your way, your self esteem is your armor. For men never be this guy, he does these things because he's broken. For women be strong enough not to encourage this guy, he is no pack leader. Your not being manipulative, your being honest.
Email Post
Labels: change confidence emotional abuse friends happiness men Otatade Okojie positivity self esteem shield