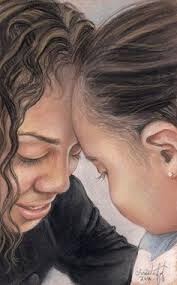 " it's because he loves you that he left," I swept my armada curls, metal and ink behind the curve of a pointed lobe. I wanted to fight her, my mother for not being honest to herself. For allowing him to tiptoe into the house his scent staining a map I had suddenly begun to figure out.
" he'll be back again," her fudge tinted eyes lit like candles. " How does someone love you so much they leave, "
" grown ups need space." we were on the edge of my bed, a bunk bed that once invited companions. I glared hard face at the pis coloured walls, once I danced in this room, now it was yellow and somehow it was blue. The scent of candle wax and gin hung in the air like a veil. Mother had rouge lipstick on. Mother did this to pep herself up Everytime he left because once upon a time she'd been told my father was too pretty for her, that once upon a time stayed. It dug into her confidence scraping the gleam out of her eyes as young girls with glowing skin, and pert buttocks strolled by our street. " gulf gulf is still here."
"I thought I'd fry her soon enough but the way she moves in that tank, " she would now say the movements of a multicoloured fish in a crowded yet isolated tank was like Mozart.
" your beautiful you know, enough not to open doors for strange men,"
She clamped skinny hands on my chin " he's not a stranger he's your father."
My mother reminded me of an old Picasso copy cat is seen in dalton market, buoyant with colour, jagged edge and sharp features. Her nose was strong enough to be a hacksaw, lips politely pulsed, hair as red as a policemans siren, but she was beautiful to me. For I knew her smell, and her smell wasn't tobacco, marijuana or the selfish stamp of bailey.
" let's look through the album again," I. Piped wanting her to feel better. My words sounded blocky to me in my stiletto tone. She needed to remember her youth, and the ghost of her laughter still echoed within the walls. " Chrissy, " she gulped. " your sixteen you know little of what love really is. Don't change the locks on him again okay?" I nodded the lie apparent only to me.
I would change them as soon as the sky lit orange, and the nightingale slept soundly in her nest.
Email Post
Labels: art creativity expression fiction love muse Otatade Okojie vision writer