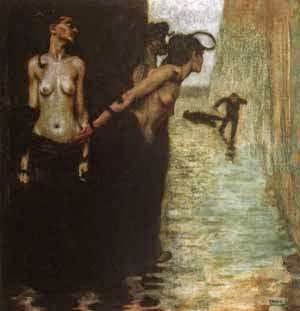 
Smells, i cant put my finger on it cinnamon leaks through your nostrils, mint slides down your lungs. The hair.Short shiny bob, rich eyes a purple blue hue, lean frame, she was something you awed at. She looked like the others, the others look like mother when she was young, pretty happy, with her shiny black bob and retail uniform. She was dead in the eyes, I had to kill her. I had to kill them, it was my favour to the world, their beauty was a stain on it. It doesn't make sense, 365 days, 24 hours, i finish work at 9:30, their eyes are glued to me, those spirits, they watch my every move, she was other worldly. I had to bury her before i burried her. It started in a dream, unravelling like a scarf, 365 days, 24 hours in a day, 7 days in a week, she was a poltergeist haunting my thoughts. They speak in hushed tones when i march into the office, whisper, gulping down words that are delicious to only them. It's girls like her, i dated a girl that looked just like Madison Grey once, she wasn't as trendy. She was braces, and didn't swivel her hips when she walked. Instead she marched. Pretty girl, no one can blame me about the blood. It's them, they make you hungry. Your not scared of newspapers, or magazine articles or being exposed, you find tidy places, plots to bury. You ignore the sobs of howling parents on flatscreen tv's, or flyers saying have you seen this girl? Madison was the last. I swore she would be the last to me, she had to be, police were not as dumb as they looked. I was a concerned neighbour with brown hair and caterpillar moustache, concerned hippy who noticed a few things out of place. I was tired of my ingenius IQ. I'm ten steps ahead of myself it's been years, and it's gotten boring. Those stupid police officers look for bodies the way barbie dolls look for vintage classics. What's so precious about this life? You come you go. Yet Jason was lying to himself, he lied often it was the potential that they could find love, the potential they could find happiness something his mother never had. She wasn't battered physically, but life. Such pretty things they were, when he buried them he lined them up like neat Chinese dolls. " 365 days, 24 hours in a day," mother had piped every morning. " What would you do with yourself?" The sadness in her eyes was like a blunt object carving it's way through your core. She was dying, every day your alive your closer to dying anyway, but unlike the women in the groups, and the hubs, mother was dying of something else, a bitterness had eaten it's way into her core. Her smiles were plastic. It was a strange thing. To be so happy and so sad all at the same time, Then the idea had come to him  when he'd seen that fox out on pitchmans Grey, it was writhing and dying, it's teeth were visible as though it were trying to smile, he'd marched straight up to the house where the bread knife was plunged it into the heart of the animal. Somehow that made so much sense, perfect sense such a pretty thing, what if someone healed it, bandaged it up and it was different. It happened on Tuesday, Tuesday the 4th of October. "365 days in a year, 24-" she hadn't seen it, it was the old screwdriver in the toolbox he drove in deep into her navel over and over again. " Liar!" he tossed the word, feeling the poison within. " Your not happy you never were. No more smiles." Hunched over he stood back and finished his cereal as he watched her bleed all over the kitchen floor. It was a strange emotion, dark, empty, numbing, the world seemed quiet but the clink of his spoon on the blue oriental bowl." I hate that sentence. I hate pretenders." He burried her in the shed, they didn't have many friends but whenever anyone called she had relocated, was living with a sister for a while. Until he disconnected the phones and with her savings moved. " 365 days in a year, 24" that sentence always came to him when he saw them, the copycats of mum. It made him erect, his veins pulse, he'd speak to himself in hushed tones as he followed them around chelsea, kingscross in London one in Bermuda, 365 days, they were sick, he was fixing their lives.
Email Post
Labels: art chelsea escapism expresionism fiction Franz von creative literature murder poetry vision