Godfrey Bloom's remark canot be dismissed as eccentric or 'rogue'. It's racism, pure and simple 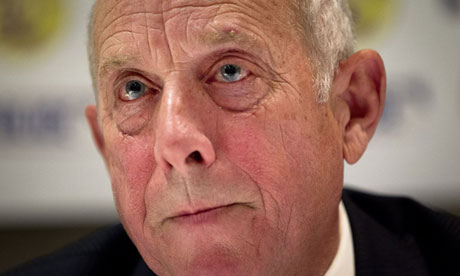 Godfrey Bloom: his remarks were unacceptable. Photograph: Matt Cetti-Roberts/LNP/Rex
It is quite odd, I think, that there has even been a debate about whether Ukip MEP Godfrey Bloom's comments about "Bongo Bongo Land" – when talking about Britain's foreign aid budget – were racist. Some sly defenders have noted that he's a "rogue politician" and there have been "what an eccentric!" chuckles. Bloom himself has been utterly defiant.
Let's be clear. His comments were racist, offensive and disparaging. My initial reaction was incredulity. I thought I had inadvertently done the time warp and landed in 1920's Britain. Where is this Bongo Bongo Land? My guess is Africa or another foreign land, where Bloom no doubt imagines grasping, dark-skinned people gutting Britain of its riches, complete with hands outstretched, hollow-eyed stares and flies around their mouths. But look on the bright side, eh, Godfrey? At least they may be able to get their hands on some Ray-Bans with all that British money.
It has been an astonishing trajectory for Bloom so far. First the revelation of the video of his speech; then a series of high-profile interviews, including one with Channel 4's Krishnan Guru-Murthy in which he stormed off. And now his latest, ridiculous defence that Bongo Bongo Land refers to a white antelope. It is so awful it borders on comical. Britain's thriving, immigrant communities have existed for many years. How do the likes of Bloom expect people connected with Africa and Asia to feel following his insulting, dismissive comments?
That'll be people like me, Godfrey. I was born in Nigeria; I've grown up in Britain. I have a British passport and navigate the dual identity of being both Nigerian and British, both foreign and familiar. It angers me and reminds me that no matter how settled I feel in this country, there are those quick to use otherness as a trump card and dismiss countries in Africa, where people like my parents are from, in derogatory terms. The sad thing is, Bloom was so bold because there is an audience for that kind of rhetoric. It's an old trick: in a difficult economic climate, blame the foreigners. With so much talk of Britain being tougher on immigration, I'm not surprised this happened.
Ukip, the supposedly non-racist political party with the odd member who spouts, um, "controversial" views, has seen a rise in popularity. Having grown up in diverse London, it's easy to forget that parts of our country aren't entirely happy about multi-cultural Britain.
Now we have Tory MP Jacob Rees-Mogg's dinner date with the Traditional Britain Group, an ultra-rightwing society that wants Doreen Lawrence deported. A spokesman for the group reacted to her recent admittance to the House of Lords by claiming she's "a person without any merit whatsoever". Doreen Lawrence has tirelessly campaigned for justice and equality. She's a fantastic role model and a credit to this country.
When I hear these comments made by Bloom and the Traditional Britain Group, it's like taking a wrong turn somewhere and stumbling on to something you really don't want to see. Bloom is still feigning confusion about his comments. "I'm 63, that's the sort of phraseology we used years ago." Buck up, Godfrey, you sound like an entitled, deluded bigot.
Email Post
Labels: bigot bongo bongo land racism ukip MEP Godfrey Blooms