Greed and Stupidity: Taiwanese man forks out £258,000..For a Croissant

Seriously,there's people dying of starvation in third world countries, hell i was starving last week, and this muppet is being scammed £258,000 for a croissant? Uhhm. A Taiwanese gentleman was scammed £258,000 after trying to buy 'French Bread so delicious it will make you cry.' Hillarious. He was actually supposed to buy this 'romantic' french bread for 99 Taiwanese dollars (£2.12)but kept being tricked into sending money. First the bank manager of the bakery,then the 'monetary supervision commission' and many more calls requesting he send more money.It was only after the seventh transmission of cash, and after he'd transferred 12 million Taiwanese dollars (£258,000) that he realised he'd been scammed.That's what i call severe terminator greed. 7 times? You fool me once shame on you, you fool me seven times....that's comic i'm sorry. People keep talking about the recession, there's money alright, it's being hoarded in the bakery! Oh well, i guess the French bread made him cry after all. 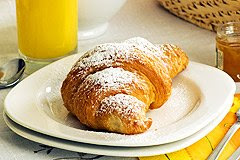