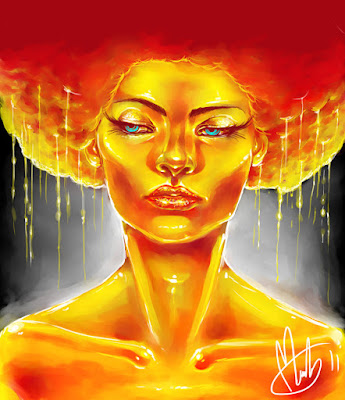 "There's nothing wrong with me," i wanted to tell him. Scream and rip it out from the pit of my lungs. Where it's moist, but the airs still chaotic with stale ciggarette smoke, and rough with the need to clear a throat. Cough up a furball. "Fuck your mum, your friends, the people who stare and analyse as we creep along the street, like were shadows in time and space." His brown eyes continued to glare through me as though i were a looking glass. "Seriously," he rubbed his eyes pink, "What are you harping on about now,let's just get in the fucking car." I zeroed in on the busy street, too many faces and too many places. People were seeing us together, i was his big black shame. "Well? Were in the middle of the main road, people need to get by, busses-"
"Tell me you get it." Tell me you get me, i thought. I'm not your prettiest, and i heard the sigh of disappointment as i approached your friends. I remember that day. His almond eyes had shone with the beauty of me. 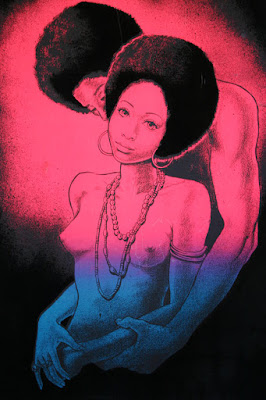 Then i watched in horror as pieces of his face sank bit by bit, reflecting the disappointment of his friends. The air swamped in a conscious silence was tainted with giggles. High pitched and deep throat growls. "So this is the princess you've been telling us about.." a fairskinned guy to the left spoke up first. He had eyes like two green orbs and a face like a magazine cover. I looked from picture to picture, shuffling my feet nervously, each person looking more like a magazine shoot than the next. They were so camouflaged in beauty, i imagined nobody cared wether they knew Aristotle, or had an understanding of Marx.An Asian girl called Nina commented on how beautiful my dark skin was, My boyfriend responded by saying nothing. 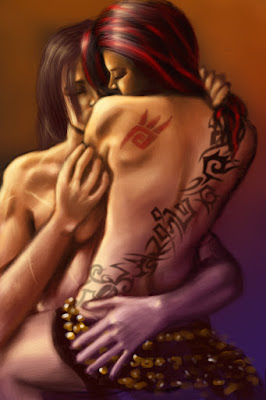 We stood at the edge of the bustling sidewalk, the door of his shiny blue toyota left hanging open, the Fresco shopping bags, being pierced by the gravel. "Is it me or is it you?" I spoke softly, like words tiptoeing out of my mouth. "I just need to know that you haven't been brainwashed by the world to love what suits everybody else-"
"Stop being ridiculous!" he spat.
"When was the last time you held my hand in public? Took me out to dinner? Worshipped me in front of another human being,"
"Isn't that blasphemy, you self righteous religious nut," he teased. Yet there was no humour behind his eyes. "Tell me i'm more important than mums who think im too dark, friends who think you can do better, ex girlfriends parading themselves like marketing campaigns."
"This is your shit." Adrien breathed a heady sigh, like those men in those westerns, sitting at a bar, craving alcohol. "If you hate yourself that's not my problem." I shook my head slowly holding his gaze with a silver knowing one of my own. I needed the truth even if it hurt.
"Your not pretty in the way my exes are, and yeah i guess my friends and my mum do think i can do better," he picked up the shopping bags and tossed them into the cars back seat. "Is that what you wanna hear? You never really care what i think. Your too busy feeling sorry for yourself about ancient shit-"
"I had a tough childhood!" I spluttered defensively.
"Everybody had a tough childhood. Were Children and we hate it, then were adults and we hate it," Adrien pulled a cream toothpick out of a black compartment in his car. "Yeah my mum doesn't like that your hairs still natural, and other really stupid crap," he paused, "but my mums on the verge of a divorce,she doesn't like anyone right now." He began tapping his pockets anxiously looking for the ciggarette i knew he'd smoked nervously two hours ago. We'd been talking about kids. "My father cheated on her ten times with a dark skinned woman,who had a huge natural Afro, and some red beads she wore everyday." He finally gave up on the quest for the ciggarette, fixing two midas eyes on me once more. "As for my friends," he smiled lazily, a slow motion flash of polaroid teeth. " Can you say associates? Connections. Each one of us got snobbed before we entered that circle.Were frenemies." He shoved the tooth pick he'd found in the glove compartment into his mouth, crunching it's end tastelessly. A habbit i'd learned to loathe. "I once dated a dark skinned girl that told me everything i'd achieved was simply because of my fair skinned complexion. She made my life hell. Hating herself and me in the process" He nodded and smiled to an old lady shuffling along. She was white with hair like candyfloss and chequered skirt, with black cardigan. She looked happier than i was. "That chick still gives me nightmares. Are you her?"
"Your exaggerating,"
"Maybe you are her. You just haven't reached that level of insanity yet,"
"Oh forgive me for expressing my feelings!" I shrieked, the perfect dramatisation of a toddlers tantrum. He leaned over the open left window snatching up the two remaining bags at my feet. 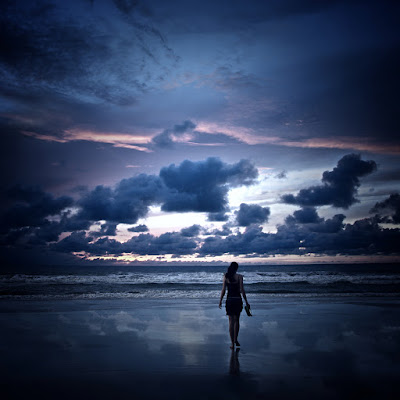 "Your insecure arse can walk home. Oh yeah, and i don't go to restaurants with you because your Paranoid as fUUUUUUUUUUCK! It's like walking with an army sargeant in the middle of a crossfire," he tilted his head to the left, exposing two perfect dimples. "I bet you can't believe your luck pulling a guy like me," he wanted to laugh, but there was a sadness that sat like salt residue in his golden eyes. "Pathetic. In your case it is about skin tone. You think i'm too good for you, how fucked up is that?" I raised my hands in defense like someone being held at gunpoint. 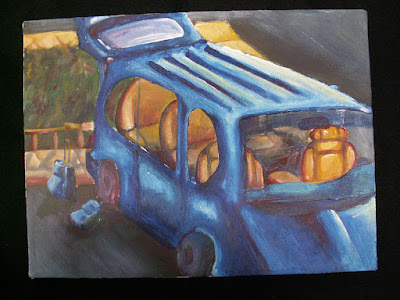 " You can keep your baggage, i'm taking mine home to cook, and having a damn good meal.When your done hating yourself...give me a call." I watched as the engine roared to life and the sapphire toyota sped into the distance. Even with my favourite tan trousers, and pink top, face painted elegantly with ebony rouge,i still hadn't felt comfortable in my own skin. Worse it had translated. My phone beeped and vibrated in my pocket. I yanked it out of my pocket. It was Adrien. I scanned it and smiled. "Your beautiful, and sexy, and i'm waiting on Redar street five minutes away." I pressed the redial button, his voice smiled into the phone. "You see i'm even willing to fight you for you, now that's some creative shit."
Email Post
Labels: Afro Black and yellow (Short story) dark skinned dating emotional baggage frenemies friends light skinned love red ebony's short story