If you hanven't seen spirited away yet, you are missing out on food for the imagination. Spirited Away is not just an animation it is an experience of life. creative, ambituos, moving, intense, phenomenal,it is a kaleidoscope into the soul. Deep, mesmerising, questionable, Spirited away is a film you see, and you never ever forget. There are many perspectives to what spirited away is a 2001 Japanese animated fantasy-adventure film written and directed by Hayao Miyazaki and produced by Studio Ghibli. The film shares the story of Chihiro Ogino, a sullen ten-year-old girl who is in the process of moving to a new neighborhood, but ends up in a mysterious world of spirits and monsters.There, Chihiro must find a way to restore her parents' true forms by working in Yubaba's bathhouse. 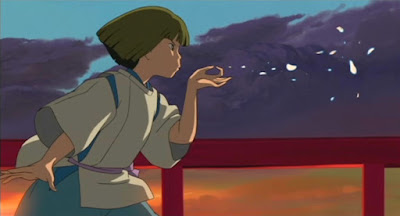 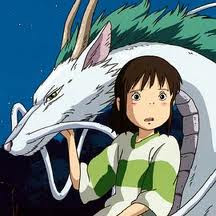 Some think it's simply about imagination,one young girls mistaken journey into the world of gods, and the supernatural. It's about more than that. It's a film whose core is about maintaining your true identity,especially in the tempests of commerce and capitalism. In the world of the gods, and yubaba the witch, the main character has to work like a slave in order to save her parents lives, and help them escape a world both scary and inviting, perfect for imagination. There is a theme in the film, "the importance of not forgetting your name." Without giving too much away, the main character is consistently told the importance of remembering her name. It's about not forgetting your identity, remembering who you are in the chaos of commerce.

Often times we enter work scenario's consumed with policies and office politics, order and routine, we forget who we are. We also forget why we do what we do, and it becomes all about trying not to be judged, conforming. Our private selves are folded away, the self we speak to in front of the mirror and tuck into bed at night. The soul of our personal life experience is captured in a sludge of monotony. It becomes replaced literally carries you into another dimension.Wether your a writer, poet, Film buff, animator, artist, my gosh the list is endless. Whoever you are this film will swallow you whole, it is incredible. It has to be added to your collection. Check out more Miyazaki films below, don't just be a fan...be a fanatic